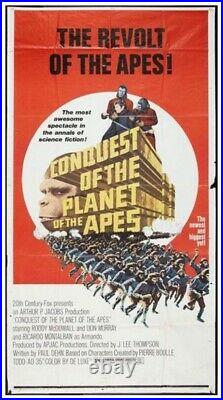 Lee Thompson sci-fi classic, CONQUEST OF THE PLANET OF THE APES (1972) starring Roddy McDowall, Don Murray, and Ricardo Montalban. Taking place some 18 years after the original ESCAPE FROM THE PLANET OF THE APES, many critics and sci-fi aficionados consider this fourth film to be the best of the APES sequels. Taking place after a mysterious plague kills all the cats and dogs on earth, a new service called Ape Management is established to train apes to serve humans. But Ape leader Caesar (McDowall) is enraged by this bondage and launches a full-scale war to overthrow humans. This original three sheet poster is a little smaller than the normal size three-sheet, as is sometimes seen in three sheets from the seventies.

MovieArt Austin guarantees that this poster is an authentic English Language three-sheet for this film. The poster was printed for distribution to English speaking countries outside the U. The art is exactly the same as the U.