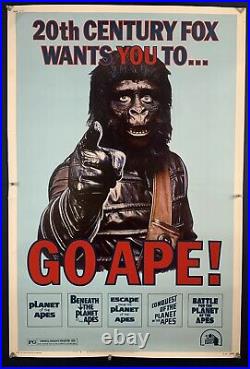 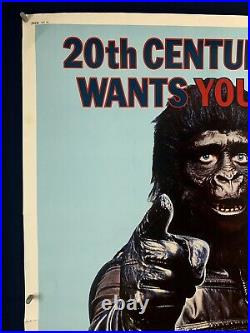 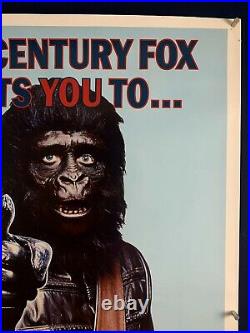 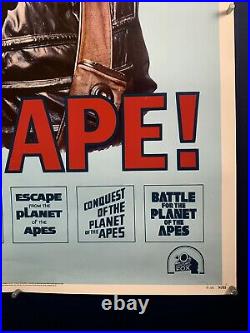 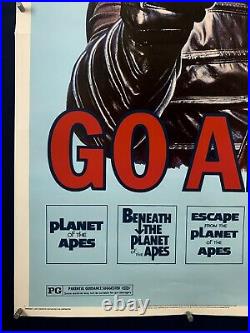 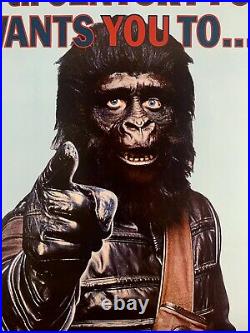 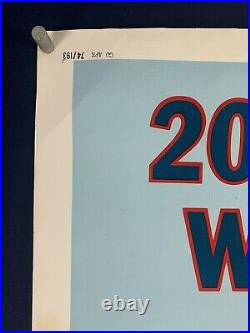 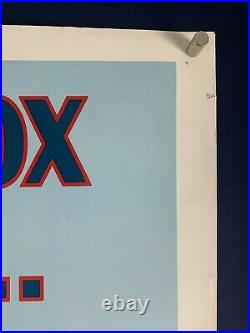 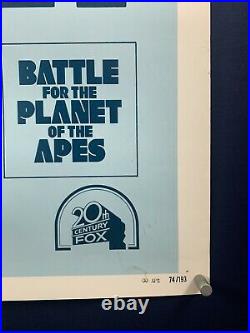 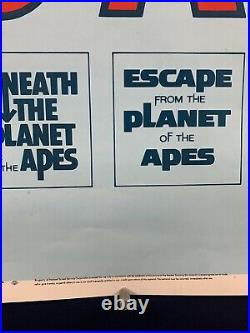 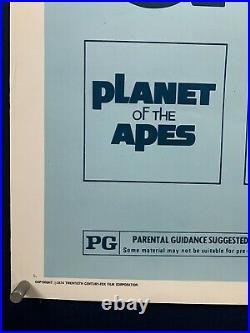 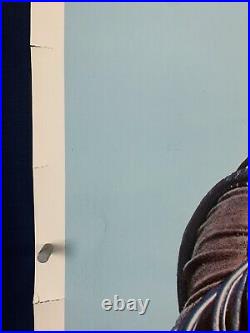 Thanks for stopping by our. Hard to find rolled 40x60 in excellent condition.

Schaffner futuristic science fiction (sci-fi) primate ape-domination thriller An unusual and important motion picture from the pen of Pierre Boulle, author of'Bridge on the River Kwai'! "; "Somewhere in the universe there must be something better than man.

In a matter of time, an astronaut will wing through the centuries and find the answer. Ha may find the most terrifying one of all on the planet where apes are the rulers and man the beast. Forced to mate by civilized apes! He landed in a world where apes are the civilized rulers and man the beast. His specialties: violence and torture. His mission: to keep man a caged beast on the Planet of the Apes"; "This is Nova. The wild human animal captured and selected for special breeding purposes. Only he has the power to save and destroy the animal called man. "; "Based on a novel by Pierre Boulle" and "Screenplay by Michael Wilson and Rod Serling" starring Charlton Heston, Roddy McDowall, Maurice Evans, Kim Hunter, James Whitmore, James Daly, and Linda Harrison (billed as "introducing Linda Harrison as Nova") AND Beneath the Planet of the Apes, the 1970 Ted Post science fiction fantasy man-vs-ape sequel "The bizarre world you met in'Planet of the Apes' was only the beginning...

Now civilization's final battle between man and ape is about to begin! "; "Can a planet long endure half ape... "; "What Lies Beneath May Be The End!

"; "An army of civilized apes... A fortress of radiation-crazed super humans... Earth's final battle is about to begin - Beneath the atomic rubble of what was once the city of New York!

"; "Based on characters created by Pierre Boulle" starring James Franciscus, Kim Hunter, Maurice Evans, Linda Harrison, Paul Richards, Victor Bouno, James Gregory, Jeff Corey, Natalie Trundy, Thomas Gomez, and Charlton Heston ("as Taylor") AND Escape From the Planet of the Apes, the 1971 Don Taylor science fiction fantasy intelligent-apes sequel "Meet baby Milo who has Washington terrified. "; "Prepare yourself for a new generation of incredible apes! They sprang from The Planet of the Apes.

"; "The Revolt of the Apes! The Most Awesome Spectacle In The Annals Of Science Fiction!

"; "The newest and biggest yet! "; "Based on characters created by Pierre Boulle" starring Roddy McDowall, Don Murray, Ricardo Montalban ("as Armando), Hari Rhodes, and Natalie Trundy AND Battle For the Planet of the Apes, the 1973 J.

Lee Thompson science fiction thriller an installment in the series of "Planet of the Apes" movies; THE FINAL CHAPTER in the incredible Apes saga. The most suspenseful showdown ever filmed as two civilizations battle for the right to inherit what's left of the earth! "; "Based upon characters created by Pierre Boulle starring Roddy McDowall, Claude Akins, Natalie Trundy, Severn Darden, Lew Ayres, Paul Williams and John Huston. Note that in 1974, 20th Century Fox had the idea of having movie theaters show the five "Planet of the Apes" movies in a single program, and produced special movie posters, with an image of an ape from the movies pointing at you, with the tagline GO APE!

The bottom of this poster had five boxes with the titles of the five movies. Most of the surviving examples of the theatrical Go Ape! Poster are found with several of the bottom boxes taped over, because the theater only showed two of the movies. An item that has never been used or displayed. May show very slight signs of age.

On folded item might show the most minimal signs of wear to the exterior due to storage. Should have no holes or tears.

Near Mint (NM) (9.4). A very lightly used item with fresh, saturated colors. On folded items, may show the most minimal wear at the folds. Should have no holes, no paper loss, may have very minor tears along edges, may have fine pinholes. An item with bright color and a clean overall appearance.

It may have general signs of use such as minor fold separation and fold wear. It may have pinholes or very minor tears.

An item with good colors and, overall, still very presentable appearance. It may have tears, slight paper loss, tape, and minor stains. It may have some fold separation.

Very Good (VG) (3.5). The item may be slightly brittle due to age, have tape on it, or may have some paper loss, wrinkling or staining.

An item that is worn, torn, and/ or badly damaged. May have staining or dry rot.

May be heavily soiled and/or large pieces missing, and may be cracked or brittle. It would be in dire need of restoration. An item missing pieces, or with cutouts.

Items are not measured exactly. Unless otherwise specified, measurements quoted above are approximate to the nearest inch. For example, if we say a one sheet poster is 27" x 41" its precise measurements may be closer to 26 3/4" x 40 7/8" (or something similar). This slight variance is quite common for all original movie posters. Poster that was issued for a movie by the National Screen Service (NSS), or.

A movie studio, or by another company authorized by the studio for display in an actual movie theater or for promotional use at the time of the. And posters with "Academy Award" on them are also "original" but they are usually considered less desirable.

From 1939 until the mid-1980s the NSS distributed almost 90% of all American movie posters. During the 1960's and 70's they had at least 6 regional print shops: New Jersey, Cleveland, Atlanta, Los Angeles, Wichita, and Dallas. They produced, printed, distributed and. All of the materials for most of the major movie studios. NSS was bought out by Technicolor, Inc.

Movie studios mostly now print and distribute their own advertising materials. Older posters, prior to the mid 1980's were usually (not always) issued folded while newer posters are issued rolled.

There are plenty of original movie posters that do not contain NSS info. To complicate matters, just because a poster has an NSS tagline, NSS number, and a GAU (printer's union) logo, does not necessarily mean it is an original movie poster. There are many fakes and reprints that have this printed on them to make them appear more authentic. Studio (non NSS) issued posters. These were a different print run at the time of the films initial release often printed directly for or by the studio for promotion and as giveaways to industry insiders.

Not necessarily for use in an actual theater, but sometimes they did make their way there. May differ slightly or be exactly the same as the NSS printing except for NSS tag and.

Measurements on these can vary slightly, but usually by no more than a half inch or so. Issued well in advance (usually many months) of a film's release. Very often similar to the regular issue but with an added line of text like "Coming This Christmas". Issued before a film is released.

Usually rarer than the regular issues. A poster made in the U.

Often featuring different artwork, but sometimes they use almost the same exact artwork/design. Sometimes the artwork/photos are more risqué and sometimes they feature an alternate title. Studios often issued many different styles of one sheets for the same movie. To differentiate them they were often marked as Style A or Style B etc. In the early 1990's some studios started issuing movie posters that were printed on both sides.

This process makes the poster stand out more in a theater light box display. Today, most posters are printed with single sided and double sided versions. Re-release or reissue posters are original theater used movie posters, but have considerably lesser value than a first release poster. Most often you can determine a reissue by looking at the bottom of your poster in the right hand corner. There will usually be an R in front of a year number as in.

If it is a reissue. Other clues are phrases such as "An Encore Hit", Brought Back. Popular Demand or Nothing Cut But the Prices.

September 2000 and our feedback. We are always listing genres of movie items to include sci-fi, horror, exploitation, sexploitation and. Ranging from the 1930s to the 2000s.

Please bookmark us and check our listings from time to time. Thank You from our team at Partners65 Vintage Movie Collectibles. The item "GO APES 5 BILL PLANET OF THE APES 40x60 Movie Poster (Fine) Sci-Fi 1974" is in sale since Sunday, August 8, 2021. This item is in the category "Entertainment Memorabilia\Movie Memorabilia\Posters\Originals-United States\1970-79". The seller is "partners65" and is located in Bethel, Connecticut.