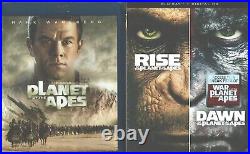 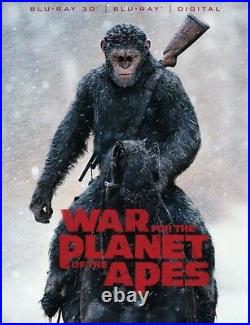 PLANET OF The APES 1-2-3-4: Tim Burton's+Rise+Dawn+War-The Remakes- NEW BLU RAYS. This product data sheet is originally written in English. This is an ORIGINAL Retail DVD, not a Bootleg, Burnt Copy, VCD or Asian Import. All of Our DVD's will play in the USA and Canada.

In some cases DVD Cover Art, UPC Code, and/or Packaging may vary. PLANET OF THE APES (2001). Remake of the classic sci-fi film from director Tim Burton. Astronaut Leo Davidson (Mark Wahlberg) in the year 2029, is conducting experiments in training genetically engineered chimps to perform complex away missions. When Leo's chimp disappears into a worm hole, Leo unadvisedly goes after him, ending up in a parallel world in which the monkeys are the keepers and humans are traded and caged like animals. Leo becomes a heroic figure in the eyes of his defeated human brethren, and he puts his trust--and his hope for escape--in Ari (Helena Bonham Carter), a forward-thinking ape who believes in human rights. But Leo has formidable opponents in Thade (Tim Roth) and Attar (Michael Clark Duncan), two power-hungry, testosterone-charged apes who wish to rid the planet of humans altogether. RISE OF THE PLANET OF THE APES.

Rise Of The Planet Of The Apes is a revolution; an action-packed epic featuring stunning visual effects and creatures unlike anything ever seen before. At the story's heart is Caesar (Andy Serkis), a chimpanzee who gains human-like intelligence and emotions from an experimental drug. Raised like a child by the drug's creator (James Franco), Caesar ultimately finds himself taken from the humans he loves and imprisoned. Seeking justice, Caesar assembles a simian army and escapes - putting man and primate on a collision course that could change the planet forever. DAWN OF THE PLANET OF THE APES.

Andy Serkis, Jason Clarke, Gary Oldman and Keri Russell star in this thrilling next chapter of The Planet of the Apes. It is 2026, and humanity has been pushed to near extinction by a deadly virus. When a group of survivors desperate to find a new source of power travel into the woods near San Francisco, they discover a highly evolved community of intelligent apes led by Caesar (Andy Serkis). The two species form a fragile peace but discention grows and the groups find themselves hurtling toward all-out war. WAR FOR THE PLANET OF THE APES. Caesar and his apes are into a deadly conflict with an army of humans led by a ruthless Colonel. After the apes suffer unimaginable losses, Caesar wrestles with his darker instincts and begins his own mythic quest to avenge his kind. As the journey finally brings them face to face, Caesar and the Colonel are pitted against each other in an epic battle that will determine the fate of both their species and the future of the planet.

But Leo has formidable opponents in Thade (Tim Roth) and Attar (Michael Clark Duncan), two power-hungry, testosterone-charged apes who wish to rid the planet of. This item is in the category "Films & TV\DVDs & Blu-rays". The seller is "walestr" and is located in this country: US. This item can be shipped worldwide.