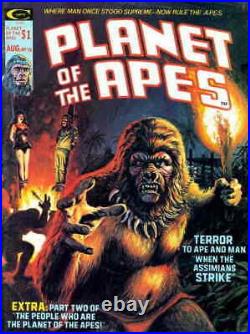 Item: Planet of the Apes (1st series) #13 Publisher: Marvel Cover Date: August 1975 Cover Artist: Bob Larkin Writer: Doug Moench Artist: Mike Ploog, Rico Rival Appearances: Storylines: The Magick-Man? S Last Gasp Purple Light Show; Escape from the Planet of the Apes, Part 2; Strangers in a Strange Land Notes. Comics are sent in a bubble mailer sandwiched between two thick slabs of cardboard to prevent damage. I want your comics to arrive in the advertised condition just as much as you do. TPBs count as the number of comics they reprint. Other notations may be found in the listing regarding how many comics they will count as. Please contact me if you're curious about the rates for higher quantities. You may get a direct market version or newsstand version (UPC) - unless specifically noted in the listing (not the picture). This item is in the category "Collectibles\Comic Books & Memorabilia\Comics\Comics & Graphic Novels". The seller is "cyberspacecomics" and is located in this country: US. This item can be shipped worldwide.