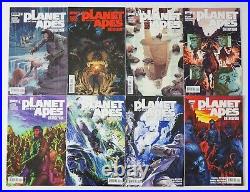 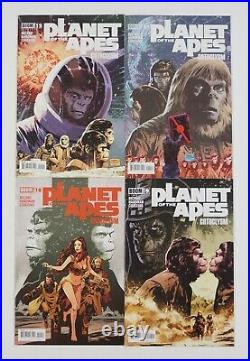 Item: Planet of the Apes: Cataclysm #1-12 Publisher: Boom! Issues #1-7 are the A variants (no variants were published for #8-12). What it's about: Eight years before astronaut George Taylor fell from the stars...

The stars fell on the PLANET OF THE APES! Once the destroyer of human civilization, the Alpha-Omega bomb of yore has slept silent in the dark side of the moon. One mad monk seeks to wake the beast... And all of ape society is at risk. It's a race against time as Doctor Zaius struggles to find an end to the madness that has engulfed all that he knows!

Comics are sent in a bubble mailer sandwiched between two thick slabs of cardboard to prevent damage. I want your comics to arrive in the advertised condition just as much as you do. TPBs count as the number of comics they reprint.

Other notations may be found in the listing regarding how many comics they will count as. Please contact me if you're curious about the rates for higher quantities. You may get a direct market version or a newsstand version (UPC) - unless specifically noted in the listing (not the picture).