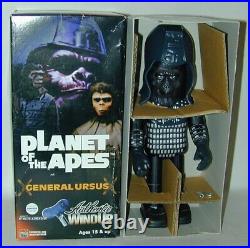 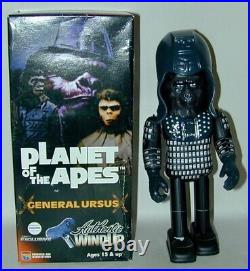 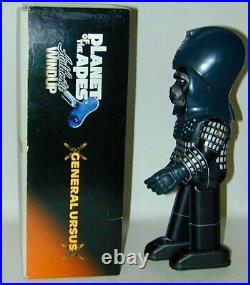 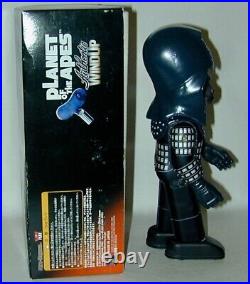 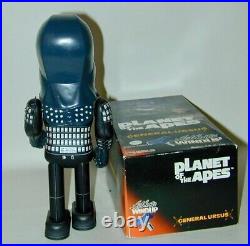 THE ITEM DESCRIPTION: Nostalgic Future Medicom Toy is the character General Ursus from the movie Planet Of The Apes. The toy was produced in 2000, made in Japan. The toy is approximately 9" tall plus an additional 1 1/2" for the separate, removal molded vinyl helmet. Complete in original box, working & in unplayed with condition.

The box cover shows some shelf wear & edge wrinkling. The body, arms & legs are tin while the head & hands are molded vinyl. The box includes the cardboard inserts & a wind-up key.

The previous owner lost or discarded the flyer & card. The flyer from Nostalgic Future would have identified the number assigned to General Ursus.

He could be 07 or 08 or 10. Medicom is a toy company based in Japan that produces action figures & tin toys based on movie characters & super heroes. In the mid-1990s they launched a toy brand called Nostalgic Future. They began with a line of wind-up tin toys made very similar to the better known Billiken toys, also from Japan.

These were followed by EDWARD SCISSORHANDS designated 03; GIANT ROBO in a shiny light blue designated 04; a color variation of GIANT ROBO designated 05; BRUCE LEE designated 06 & followed by GENERAL URSUS, CORNELIA, THADE & SOLDIER APE from the movie PLANET OF THE APES. The apes were given the numbers 07, 08, 09 &10. NEXT, THE IMPORTANT STUFF:IMPORTANT: PLEASE READ. YOU NEED ONLY READ THIS ONCE. PLEASE READ COMPLETE DESCRIPTION & VIEW ALL MY PHOTOGRAPHS AS THE PICTURES ARE CONSIDERED PART OF THE DESCRIPTION.

YOUR COMPLETE SATISFACTION IS GUARANTEED. This item is in the category "Toys & Hobbies\Vintage & Antique Toys\Tin\Character". The seller is "charactercarl" and is located in this country: US. This item can be shipped worldwide.