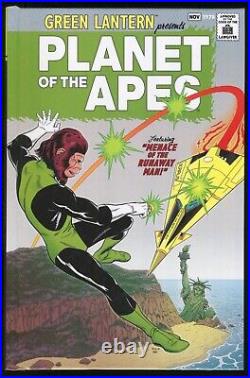 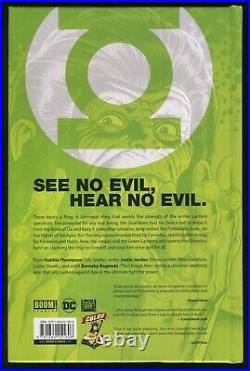 As its power echoes through the multiverse, the Guardians of the Universe must reveal to the Green Lantern Corps a secret they had hoped would remain buried. With the Green Lantern Corps, led by Hal Jordan, racing to get to the source of this power before Sinestro can get his hands on it, they will discover a secret concealed by the Guardians of the Universe on an alternate Earth within a time loop- the setting of Planet of the Apes.

Studios & DC Comics are proud to bring together two classic properties in a historic crossover event. And also includes a Cover Gallery of the comic issues.

When Taylor goes missing, Cornelius investigates and discovers an ancient ring, unlike anything the universe has ever seen. As its power echoes through the stars, the Guardians of the Universe must reveal to their Lanterns a secret they had hoped would remain buried. With the Green Lantern Corps, led by Hal Jordan, racing to get to the source of this power before Sinestro can get his hands on it, they will discover a truth that will change them forever on.

The Planet of the Apes. Ape City is in a panic. Word has spread of the capture of a talking human (Hal) and his bizarre alien companion (Sinestro). What's worse, a group of strange, scarred humans - Mutants - are spotted in The Forbidden Zone, being led by a strange-acting Cornelius, who's wearing a ring - a ring Sinestro has long been searching for.

As Cornelius loses himself to the ring, Doctor Zaius and Sinestro uncover a grave truth about the Planet of the Apes. With Hal Jordan, Zira, and Nova on the hunt through the Forbidden Zone, Kilowog, Guy Gardner, and Arisia bring reinforcements. The origin of the Universal Ring revealed! Battle of the Red and Green Lanterns on the Planet of the Apes!

As Cornelius' corruption manipulates the mutants into an army of ring bearers, Hal Jordan and Zira will do all they can to save him before it's too late. The war on the Planet of the Apes has begun! The battle has infected Ape City.

Cornelius' army of empowered mutants and apes lay waste to Grodd's Gorilla Army and Red Lanterns. This world's only hope lies with Hal Jordan and Sinestro, who must work together to save Cornelius from the corruption of the Universal Ring. Exclusive Hardcover reprints/collects: Planet of the Apes / Green Lantern (2017) Issues #1-6. FC, 112 pages, HC, 10.25" x 6.5". Collectible Entertainment note: Exclusive Hardcover is New & Unread.

A must have for any serious Planet of the Apes and/or Green Lantern collector / enthusiast. A fun & entertaining read.

Please check out all my other Groo or Conan or Magazines or. Horror or Werewolf or Zombie or Frank. Or GI Joe or War or Judge Dredd or Infinity or Marvel Secret Wars or Crisis on Infinite Earths or Spawn or Venom or Carnage or Toxin or Kolchak or Mad Max or Star Trek or Starship Troopers or Science Fiction or Horror or James Bond or Adventure Time or Movie Adaptations or Spider-Man or Flash Gordon or Richard Corben or Indiana Jones or Star Wars or Jurassic Park or Dinosaurs Attack or Mars Attacks or Planet of the Apes or Godzilla or Thing or Robocop or Aliens or Predator or Terminator listings by visiting my store and typing. In the store search engine. This item is in the category "Collectibles\Comic Books & Memorabilia\Comics\Comics & Graphic Novels".

The seller is "collectible_entertainment" and is located in this country: US. This item can be shipped worldwide.