PLANET OF THE APES (May 5, 1967) Shooting script by Michael Wilson, Rod Serling 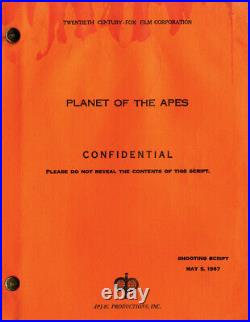 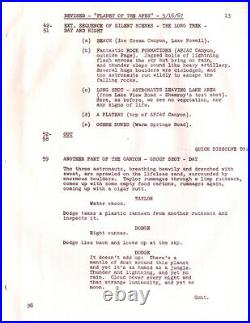 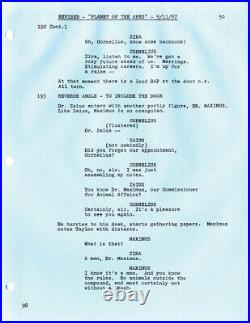 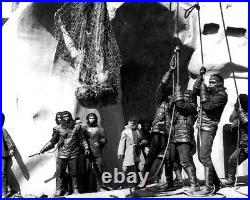 Vintage original film script, quarto, brad bound, 121 pp. Mimeo (with revision pages on blue and pink paper dated up through 5/17/67), staining to top of front wrapper, scattered light stains and rippling (mostly affecting title page), VERY GOOD+. This is the screenplay Michael Wilson wrote for the 1968 PLANET OF THE APES after an initial draft had been written by Rod Serling. Both screenwriters are credited on the completed film, and Serling is generally acknowledged to have come up with the film's twist ending. Oklahoma-born Michael Wilson (1914-78) was a top Hollywood screenwriter, known for being blacklisted during the McCarthy Era.

Prior to being blacklisted, he won an Academy Award as one of the screenwriters of A PLACE IN THE SUN (George Stevens, 1951) and received an Oscar nomination for his screenplay of 5 FINGERS (Joseph Mankiewicz, 1953). During the blacklist period, Wilson did some of his best work, working under pseudonyms while writing or co-writing the screenplays of THE COURT-MARTIAL OF BILLY MITCHELL (Otto Preminger, 1955), FRIENDLY PERSUASION (William Wyler, 1956), and his most acclaimed film, LAWRENCE OF ARABIA (David Lean, 1962). During that same period, Wilson co-wrote the screenplay for Lean's THE BRIDGE ON THE RIVER KWAI (1957), adapted from a novel by Pierre Boulle (who received sole screenplay credit).

The screenplay of PLANET OF THE APES would be Wilson's second adaptation of a novel by Boulle. Wilson's shooting script is very close to what was actually filmed, though there were numerous tweaks and modifications in the process.

For example, both the shooting script and the film begin with the astronaut Taylor (Charlton Heston) aboard his spaceship dictating a sort of "Captain's log" before putting himself in hibernation along with his three astronaut companions for the duration of the voyage, but what he says has been somewhat modified in the transition from shooting script to film. For example, in the shooting script, but not the film, he says: TAYLOR. I leave the twentieth century without regret. Said'Modern man is the missing link between the ape and the human being. Like Pierre Boulle's Swiftian novel, the Serling/Wilson/Schaffner film is about explorers from Earth who visit a planet on which apes chimpanzees, orangutans, and gorillas are the dominant civilized species, while humans are reduced to a savage non-verbal animal state.

One significant difference between the Serling script and the Wilson script is that Serling's script depicted a futuristic ape society. At director Franklin Schaffner's suggestion, Wilson's rewrite made the ape society comparatively primitive, thereby significantly reducing the film's production cost. Taylor is captured by the ruling apes and taken to a lab along with a number of the native human primitives. The story's central conflict is between two chimpanzee scientists, Dr. Zira (Kim Hunter) and Dr.

Cornelius (Roddy McDowall), who believe that Taylor, whom they name "Bright Eyes", might have an intelligence comparable to the dominant ape species, and the elderly orangutan, Dr. Zaius (Maurice Evans), "Chief Defender of the Faith", who claims such a thing is impossible. Man has no understanding, Dr.

He can be taught a few simple tricks. The story can be interpreted allegorically as a satire of discrimination based on ethnicity, race, or class. As an example of how the dialogue in the shooting script was tweaked, Taylor's line in the screenplay, once he gets his voice back, Get away from me, you dirty ape! " becomes, as delivered by Heston in the movie, its most famous line, "Take your stinking paws off me, you damn dirty ape!

" Once Taylor shows he can speak, the apes do not interpret this to be evidence of "human intelligence or that he comes, as he claims, from another planet. Instead, they conclude that he is a mutation or freak. Among the screenplay's satirical targets is the theory of evolution and its deniers. Wilson's shooting script is highly readable.

The 1968 film version of PLANET OF THE APES is such a culturally significant artifact that almost everyone even those who have not seen it or its various sequels and remakes knows about its Twilight Zone-like conclusion. Regardless, we won't spoil it here.

It must come back in the same condition as it was sent. AUTHENTICATION: My name is Walter Reuben. I have been collecting movie posters since 1978. I have been a full-time dealer since 1982.

Everything which I sell is fully researched and entirely guaranteed to be completely authentic and as described. A lifetime of experience goes behind every description of every piece which I offer. ABOUT ME: For further information, go to the ABOUT ME. The item "PLANET OF THE APES (May 5, 1967) Shooting script by Michael Wilson, Rod Serling" is in sale since Tuesday, August 10, 2021.

This item is in the category "Entertainment Memorabilia\Movie Memorabilia\Scripts\Originals\Unsigned". The seller is "walterfilmusa" and is located in Los Angeles, California.