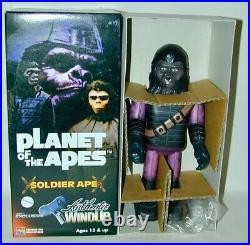 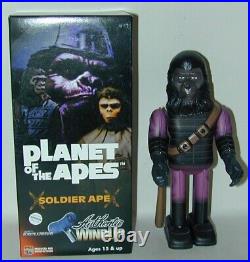 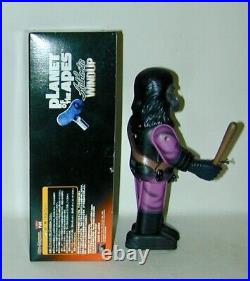 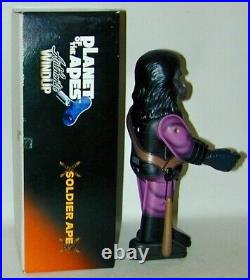 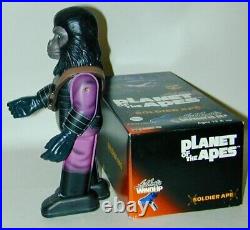 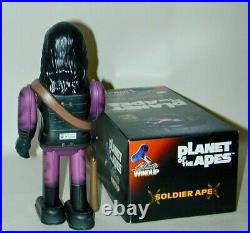 THE ITEM DESCRIPTION: Nostalgic Future Medicom Toy is the character Soldier Ape from the movie Planet Of The Apes. The toy was produced in 2000, made in Japan. The toy is approximately 9 tall. The Soldier Ape has a bandolier across his chest that has a hook at the bottom with a club hanging from the hook.

The club & bandolier are molded vinyl. Complete in original box, working & in unplayed with condition. The body, arms & legs are tin while the head & hands are molded vinyl. The box includes the cardboard inserts & a wind-up key. The previous owner lost or discarded the flyer & card. The flyer from Nostalgic Future would have identified the number assigned to the Soldier Ape. He could be 07 or 08 or 10.

Medicom is a toy company based in Japan that produces action figures & tin toys based on movie characters & super heroes. In the mid-1990s they launched a toy brand called Nostalgic Future. They began with a line of wind-up tin toys made very similar to the better known Billiken toys, also from Japan.

These were followed by EDWARD SCISSORHANDS designated 03; GIANT ROBO in a shiny light blue designated 04; a color variation of GIANT ROBO designated 05; BRUCE LEE designated 06 & followed by GENERAL URSUS, CORNELIA, THADE & SOLDIER APE from the movie PLANET OF THE APES. The apes were given the numbers 07, 08, 09 &10. NEXT, THE IMPORTANT STUFF:IMPORTANT: PLEASE READ. YOU NEED ONLY READ THIS ONCE. PLEASE READ COMPLETE DESCRIPTION & VIEW ALL MY PHOTOGRAPHS AS THE PICTURES ARE CONSIDERED PART OF THE DESCRIPTION.

YOUR COMPLETE SATISFACTION IS GUARANTEED. This item is in the category "Toys & Hobbies\Vintage & Antique Toys\Tin\Character". The seller is "charactercarl" and is located in this country: US. This item can be shipped worldwide.