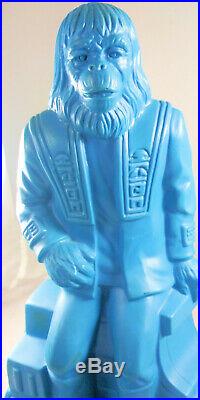 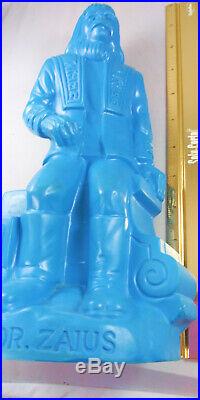 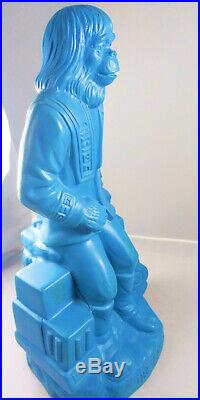 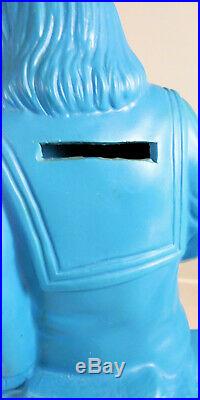 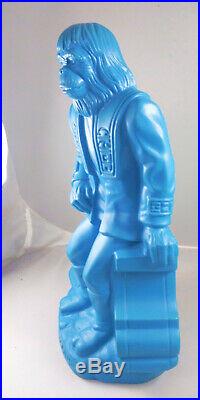 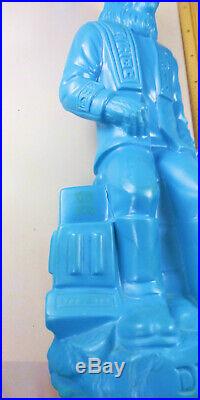 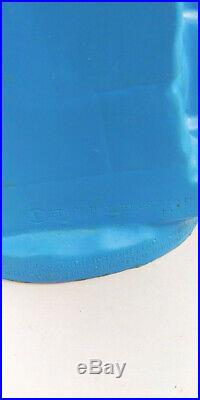 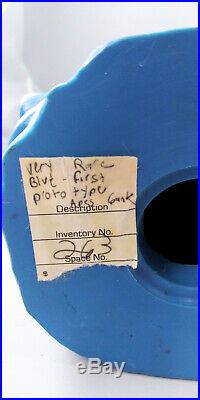 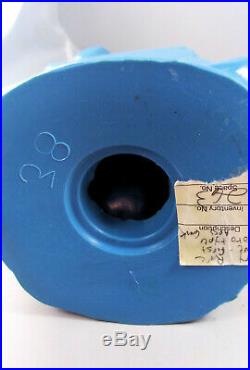 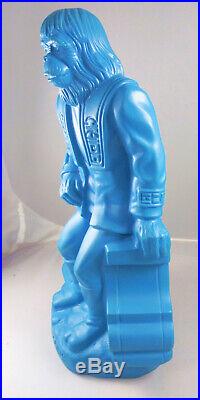 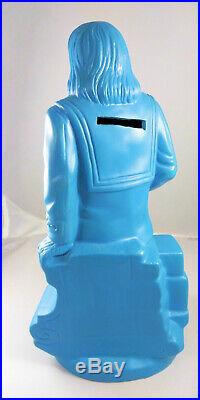 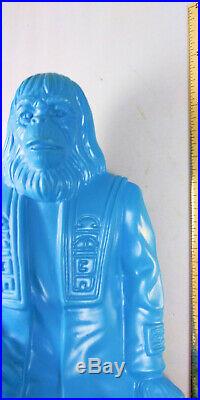 I bought it from an antiques dealer at a California toy show in the 1980s. It is solid blue plastic with the classic Dr.

Zaius form, and the number 38 is engraved backwards on the base. Another toy dealer told me in the 90s that it may have been a test pressing rather than a prototype, but that he thought it was extremely rare and either way, it's a pre-production version of the classic bank and it is so cool. Zaius is approximately 11 inches tall. He is pure blue plastic and has never been painted.

He is seated on a brick throne and wears his uniform with obscure symbols over the lapels and around the sleeves. He has an uneven coin slot in the back of his shoulders that looks to have been cut by hand, and came without a coin plug in the base. And Twentieth Century Fox Film Corporation. There is some adhesive on the left of the piece when you're facing it and a thin crack down the side of his right leg and onto his shin (left side of the piece as you're facing it), as shown in the photos. I think they do not detract much from this unique piece much, and the adhesive discoloration probably could be removed though I haven't been brave enough to try.

Zaius was the Minister of Science while simultaneously being the Chief Defender of the Faith- and despite that seeming paradox he was a smart dude though a tad species-ist! Zira, I must caution you. Experimental brain surgery on these creatures is one thing, and I'm all in favor of it.

But your behavior studies are another matter. To suggest that we can learn anything about the simian nature from a study of man is sheer nonsense. Why, man is a nuisance.

He eats up his food supply in the forest, then migrates to our green veldts and ravages our crops. The sooner he is exterminated, the better.

It's a question of simian survival. This piece is probably for the more advanced collector who's in the market for something rare and unique and it will definitely step up your Planet of the Apes collection to the next level. The item "PROTOTYPE OR TEST Dr Zaius Planet of the Apes Plastic Bank Playpals 1967 Vintage" is in sale since Thursday, August 6, 2020. This item is in the category "Collectibles\Science Fiction & Horror\Planet of the Apes". The seller is "risingleo" and is located in Los Angeles, California.